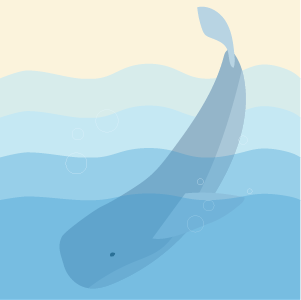 As we continue to discuss the shift in user time from desktop to smartphones and other mobile devices, we can’t avoid looking at the impact this shift has on the economy of the web. As the IAB reported in its recent 2014 Internet Advertising Revenue Report, we’ve reached a point where 25% of all ad spend goes toward mobile ads, a 68% rise from 2013. [1] This number is projected to continue to explode over the coming years, with some forecasts estimating that mobile ad spend could surpass desktop as early as next year. [2]

Up to this point, metrics used to track advertising performance have been confined to a world where ads are displayed on desktops or large format devices. When measuring performance based on impressions, screen size matters very little, since impressions measure if an ad is loaded, not if an ad comes into view. But, we’re approaching a time when impressions are no longer the primary metric for billing and tracking ads. Last year the Media Ratings Council (MRC) launched its Viewable Ad Impression Measurement Guidelines, officially allowing the media industry to transact on viewability: to use viewable impressions as a currency for buying and selling digital advertising.

In this guide, the MRC defined viewability as the percentage of ads that are deemed viewable out of all ads served, with an ad being considered viewable if at least 50% of the ad’s pixels are in view for at least one continuous second. Because aspects such as size and location directly affect whether an ad can become viewable, screen size and scroll behavior now play a pivotal role in the viewability of an ad.

As a first step, the MRC’s definition of viewability focused on desktop display ads. However, the mobile ad landscape is fundamentally different. As such, the desktop standard doesn’t mesh well with the mobile world of small screens, fast scrolling, and automatic screen resizing. [3] For this reason the MRC has released Interim Guidelines on Mobile Viewability and is working to develop new guidelines that properly address the difference between desktop and mobile ads. Until these new guidelines are finalized, mobile vendors will continue to report using the desktop viewability definition, which raises the question: what does the mobile ad landscape look like when analyzed through the lens of viewability, and how does this differ from the desktop ad landscape? 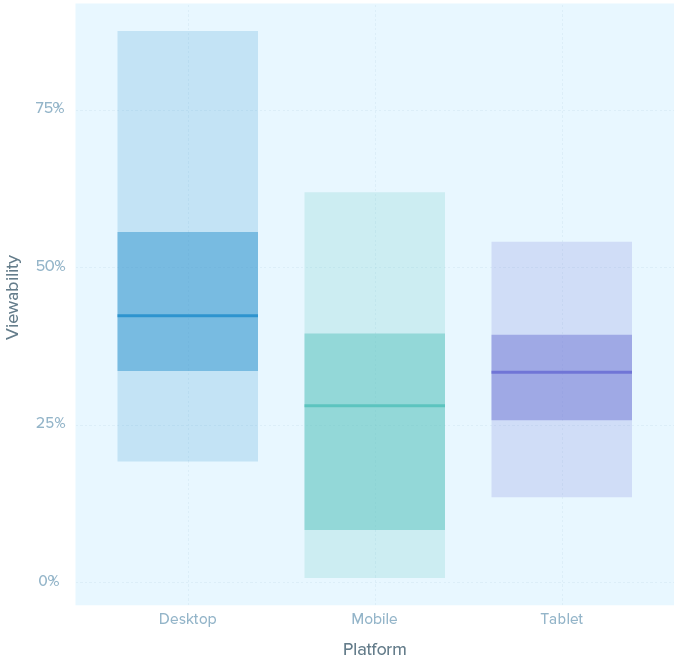 At first glance we can see that ads on mobile don’t seem to be living up to a viewability standard intended to fit a desktop model. Among sites sampled, only about 27% of mobile ads were viewable, compared to 47% of desktop ads. It should be noted here that this number varies greatly from numbers quoted by others, as Chartbeat data only covers ads on the mobile web, and does not include ads in mobile apps.

Screen size and scroll behavior now play a pivotal role in the viewability of an ad.

There are several key variables that could play into the drastic differences in viewability between mobile and desktop ads, the most obvious of these being screen size. Mobile devices have far smaller screens to display ads on; therefore, in order to get 50% of ad pixels in view, ads must be sized to fit within the confines set by mobile browsers. To give an idea of the scope of screen size limitations, think about this: 95% of mobile screens have widths smaller than 410px and heights smaller than 600px. It’s no surprise then that the vast majority of viewable ads on mobile tend to have widths below 350px.

Most Viewable Ad Sizes on Mobile

However, as the figure illustrates, ad formats larger than 350px can still be viewable in a mobile browser if the user zooms out.

Vertical positioning, or how far down the page an ad unit is placed, also plays a large role in determining viewability for small screen devices. Similar to desktop readers, a high proportion of mobile users leave the page at or above the fold. Here, we define the fold as the place on the screen where everything above is visible at page load, and everything below requires scrolling to be seen.

We can see this “above fold” trend in Figure 3. Each bin in the figure represents the percentage of users that left at that point. For mobile and desktop we can see that a large spike occurs just before or at the fold. For desktop, 35% of users leave at or above the fold, for mobile this trend is slightly less pronounced at only 14%. The fact that large numbers of readers leave at or before the fold means that ads placed above the fold have the best chance of being seen.

The majority of users exit near the fold on both platforms 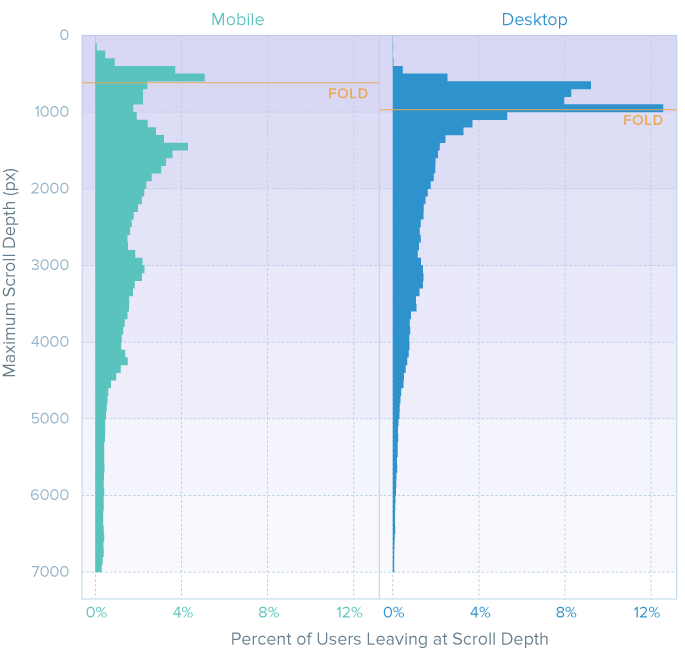 That said, as we’ve shown in previous studies of desktop ads, the very top of the page isn’t your best bet when it comes to viewable ad positions. The most desirable ad positions tend to be right above the page fold. [4] The same holds true for mobile ads.

Distance of Desktop Ads to Fold vs. Viewability

Ads with the highest average viewability are located at or just before the fold.

Distance of Mobile Ads to Fold vs. Viewability

Ads that must be reached by scrolling a few times actually see an uptick in viewability. 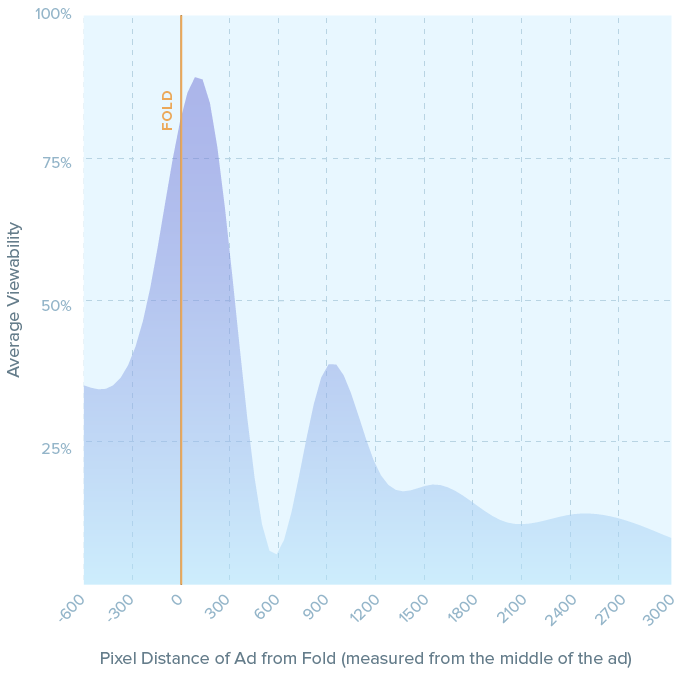 That’s not to say that ads below the fold aren’t valuable. For desktop, we already know that ads at the bottom of the page are about as viewable as those located at the very top of the page. For mobile, ads that must be reached by scrolling a few times actually see an uptick in viewability. The deviation here between desktop and mobile ad viewability on positions below the fold is most tightly linked with user scroll behavior.

As discussed earlier, 35% of desktop users leave before scrolling. 50% of desktop users have left by 1350 pixels, which is only just below the fold. On mobile 50% of users have left by 2350 pixels, considerably further down the page when considering how small screens are on mobile devices. This affords ads located far below the fold a better chance at being seen on mobile than on desktop. Unfortunately, when it comes to ad placement, 88% of mobile ads are located above 2350 pixels, creating a large gap between where users scroll and where ads are placed.

The deviation between desktop and mobile ad viewability on positions below the fold is most tightly linked with user scroll behavior.

As the digital advertising world shifts ever more towards transacting on viewable impressions, there is still work to be done to get mobile ad performance on par with its desktop counterpart. Fortunately, there are many avenues leading toward a more viewable mobile web. Knowing how—and where on the page—users consume content on mobile devices is a first step in positioning ads where users may actually see them.

By discovering (and acknowledging) the differences between desktop and mobile usage, we can create new mobile-centric models that better illustrate where premium ad spots should be placed. The MRC and The Interactive Advertising Bureau (IAB) are currently directing their efforts toward better understanding these usage variables in order to create a distinct viewability definition for mobile. The hope then, is a future in which mobile advertising is driven by data—that the industry makes decisions based upon the actual behaviors of the users to whom their ads are directed. 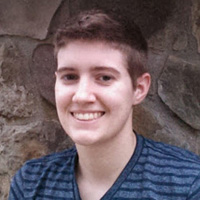 about the author / kris harbold

Kris is leading the charge in developing novel ways to communicate the intricacies of Chartbeat’s data landscape though complex visualizations and applications. His previous work has included constructing algorithms to simulate ad refreshing, and to detect anomalous events in the life of an ad campaign. Outside of the office Kris can be found scaling rock faces, exploring the world of overly complex board games, and hacking on various tech toys. Kris received a BS in Computer Engineering from The George Washington University. @harbolkn / kris@chartbeat.com